100 Amazing Facts About The Sabbath and Sunday

"Sunday – fulfillment of the Sabbath. Sunday is expressly distinguished from the Sabbath which it follows chronologically every week; for Christians its ceremonial observance replaces that of the Sabbath...

In respecting religious liberty and the common good of all, Christians should seek recognition of Sundays and the Church’s holy days as legal holidays."

And here are various Catholic sources claiming the change was the doing of the Roman Catholic Church:

"But you may read the Bible from Genesis to Revelation, and you will not find a single line authorizing the sanctification of Sunday. The Scriptures enforce the religious observance of Saturday, a day which we never sanctify."

"If Protestants would follow the Bible, they should worship God on the Sabbath day by God is Saturday. In keeping the Sunday, they are following a law of the Catholic Church."

"Question: Have you any other way of proving the Church has power to institute festivals of precept? 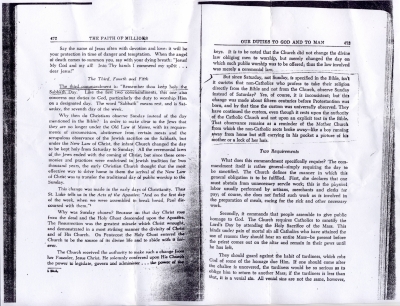 "Practically everything Protestants regard as essential or important they have received from the Catholic Church... The Protestant mind does not seem to realize that in accepting the Bible and observing the Sunday, in keeping Christmas and Easter, they are accepting the authority of the spokesman for the church, the Pope."

"Thus the observance of Sunday by the Protestants is a homage they pay, in spite of themselves, to the authority of the (Catholic) Church."

"The Catholic Church, for over one thousand years before the existence of a Protestant, by virtue of her divine mission, changed the day from Saturday to Sunday...

The Adventists are the only body of Christians with the Bible as their teacher, who can find no warrant in its pages for the change of day from the seventh to the first. Hence their appellation, "Seventh-day Adventists."

"It was the holy Catholic Church that changed the day of rest from Saturday to Sunday, the 1st day of the week. And it not only compelled all to keep Sunday, but at the Council of Laodicea, AD 364, anathematized those who kept the Sabbath and urged all persons to labor on the 7th day under penalty of anathema." 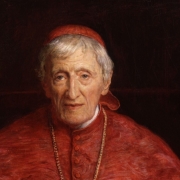 "I have repeatedly offered $1000 to any one who can furnish any proof from the Bible that Sunday is the day we are bound to keep...The Bible says, “Remember the Sabbath day to keep it holy,” but the Catholic Church says, “No, keep the first day of the week,” and the whole world bows in obedience."

"The use of temples, and these dedicated to particular saints, and ornamented on occasions with branches of trees; incense, lamps, and candles; votive offerings on recovery from illness; holy water; asylums; holydays and seasons…are all of pagan origin and sanctified by their adoption into the Church."

"The [catholic] Church is above the Bible, and this transference of the Sabbath observance is proof of that fact."

"We hold upon this earth the place of God Almighty."

"The Pope is of so great dignity and so exalted that he is not a mere man, but as it were God, and the vicar of God."

"The letters inscribed in the Pope’s miter are these: VICARIUS FILLII DEI, which is the Latin for, “Vicar of the Son of God.”

Letter from C.F. Thomas, Chancellor of Cardinal Gibbons on October 28, 1895:

"Of course the Catholic Church claims that the change was her act…And the act is a MARK of her ecclesiastical power and authority in religious matters."

"Sunday...is purely a creation of the Catholic Church."

"Sunday...It is a law of the Catholic Church alone..."

"Not the Creator of the Universe in Genesis 2:1-3, but the Catholic Church “can claim the honor of having granted man a pause to his work every seven days.”

"The (Catholic) Church changed the observance of the Sabbath to Sunday by right of the divine, infallible authority given to her by her Founder, Jesus Christ. The Protestant claiming the Bible to be the only guide of faith, has no warrant for observing Sunday. In this matter, the Seventh-day Adventist is the only consistent Protestant."

"The Church made a sacred day of Sunday…largely because it was the weekly festival of the sun; for it was a definite Christian policy to take over the pagan festivals endeared to the people by tradition, and to give them a Christian significance."

John A. O'Brien, The Faith of Millions: the Credentials of the Catholic Religion Revised Edition (Our Sunday Visitor Publishing, 1974): 400-401:

"But since Saturday, not Sunday, is specified in the Bible, isn't it curious that non-Catholics, who claim to take their religion directly from the Bible and not from the Church, observe Sunday instead of Saturday? Yes, of course, it is inconsistent; but this change was made about fifteen centuries before Protestantism was born, and by that time the custom was universally observed. They have continued the custom even though it rests upon the authority of the Catholic Church and not upon and explicit text in the Bible. That observance remains as a reminder of the Mother Church from which the non-Catholic sects broke away—like a boy running away from home but still carrying in his pocket a picture of his mother or a lock of her hair."

This change from Saturday to Sunday Sabbath was prophesied about in Daniel 7. The great reformer Philipp Melanchton knew this truth five centuries ago. He wrote this:

"He changeth the tymes and lawes that any of the sixe worke dayes commanded of God will make them unholy and idle dayes when he lyste, or of their owne holy dayes abolished make worke dayes agen, or when they changed ye Saterday into Sondaye...They have changed God’s lawes and turned them into their owne tradicions to be kept above God’s precepts.ii

Disclaimer: The contents of this article and website are not intended to accuse individuals. There are many priests and faithful believers in Roman Catholicism who serve God to the best of their ability and are seen by God as His children. The information contained herein is directed only towards the Roman Catholic religio-political system that has reigned in varying degrees of power for nearly two millennia. Under the influence of its successive popes, bishops, and cardinals, this system has established an increasing number of doctrines and statements that clearly go against Scripture.

It is our sincere desire to lay the clear Word of God before you, the truth-seeking reader, so you may decide for yourself what is truth and what is error. If you find herein anything contrary to the Word of God, you need not accept it. But if you desire to seek for Truth as for hidden treasure, and find herein something of that quality, we encourage you to make all haste to accept that Truth which is revealed to you by the Holy Spirit.

⇦ Why Study the Sanctuary?
THE JUDGMENT – WHERE? WHEN? ⇨